I'm going to start this post off with a big old THANK YOU to everyone who participated!  To our volunteers, thank you for hanging out helping people vote, talking chicken all day, and setting the booth up and tearing it all back down at the end.  To the chicken owners, thank you for entering your girls in our little contest and being generally so awesome and enthusiastic to show them off! You are all winners cause you brought so much happiness to me (in particular) and to everyone who came by to ogle the chickens.  And thank you to all who came out to see the girls, discuss their various merits and crazy feathers, and vote!  Thank you!

This year I got my act together and got an actual real live photographer out to take pictures of our girls, so we can share them with you all who couldn't make it to the show.  Here they are, in no particular order: 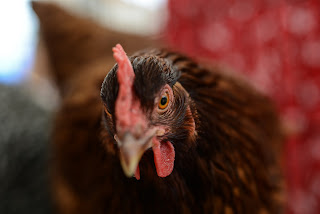 Angelina
Rhode Island Red
About: She struts with poise and gentility in her plumage's elegant rainbow hue in the Lents evening sun. She got her nails done just for the contest. 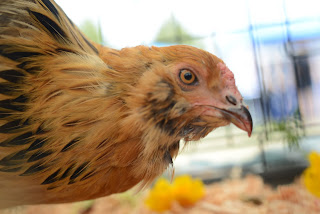 Baby Chick Marie
Ameracana
Baby chick Marie is the youngest of her four siblings. We still call her “baby chick”, because she has the personality of a youngest and is so dang cute with those puffy cheeks! (But don’t let the cheeks fool you--keep her away from your summer squash plants!) 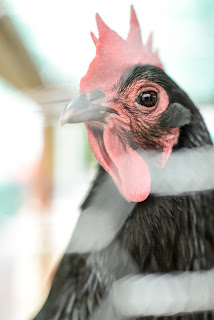 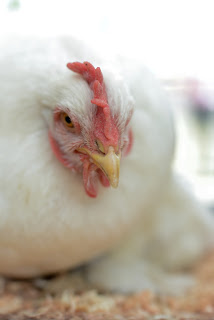 Blanche
White Cochin
This classy, fluffy hen is the Queen of the roost. She has a healthy appetite for garden greens and loves blueberries. 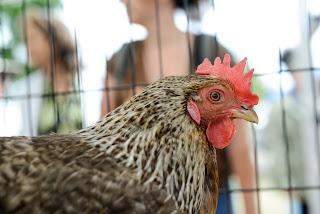 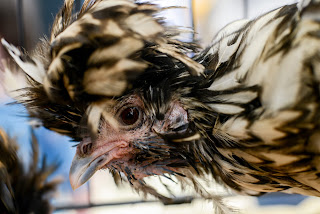 Dixie Chick
Silver Laced Polish Crested
Dixie Chick is white and black. She is a shy but cleaver hen who is quick as a whip at finding all the best treats in the yard. She doesn't waste time establishing her place in the pecking order when there are mealworms to be found! 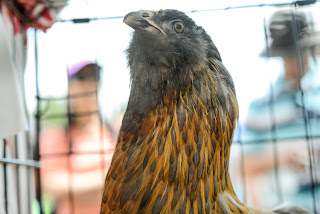 Grace-Mary
Easter Egger (lays blue-green eggs)
This lovely lady loves to spend the day sitting center in the doorway of her coop , enjoying the sunshine and fresh Oregon air. Don't tell her I told you , but watermelon is the way to her heart. 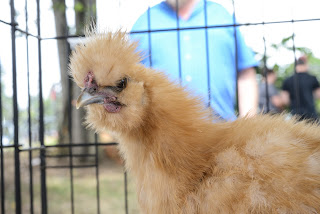 Lilo
Buff Silkie Pullet (3 months old)
Lilo is a buff silkie and is named after the character in the movie Lilo and Stitch. She has a great head dress and is super sassy. She loves being held and purrs while petting her! 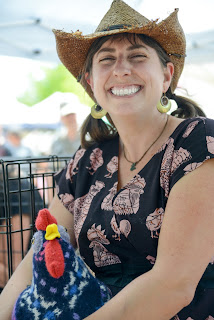 Maggie and her chicken dress (that's me!) 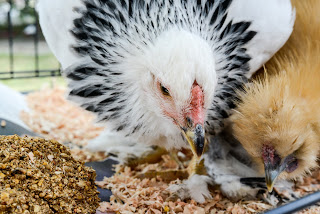 Minnie
Light Brahma
Minnie is the black and white light Brahma. She is the largest of our 4 chicks and she is only 3 months old. She is definitely a gentle giant! 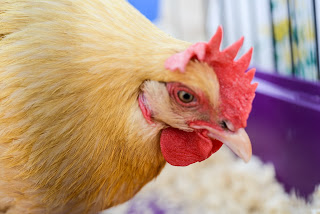 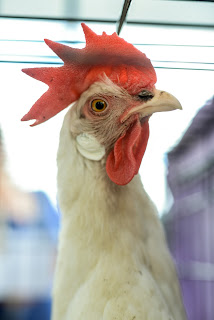 Plastic
White Plymouth Rock
Plastic is a 1 year old hen, who enjoys warm baths and having her toe nails painted. She loves to be blow dried after every warm bath, once she is dry she will sit and watch TV with me. 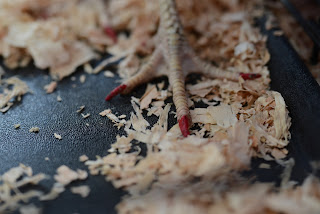 Plastic's fancy painted toenails.  She also had a teeny bandanna, but she kept taking it off, so I left it off her.  She also has the distinction this year of being our only hen who laid an egg at the fair this year! 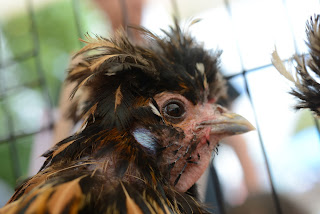 Priscilla
Gold Laced Polish Crested
Priscilla is gold and black. She may be small but she is mighty. Priscilla is boss hen and she has made that known since day 1 as part of the family. She struts around the hen house like the tough beauty queen that she is. 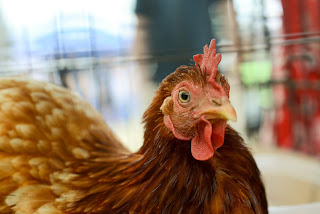 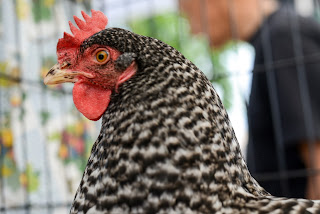 Sapphire
Barred Plymouth Rock
Sapphire is a black and white Bar Rock. She's the queen of the flock, confident, classy and sophisticated. She is on the short list of Hillary Clinton's running mate selection. 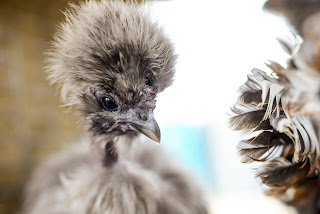 Wanda
Showgirl (Naked-Neck Silkie Cross)
Wanda is a Naked Neck Silkie. She is a very sweet and special girl in my breeding flock. She is my first and only Showgirl and hopefully the beginning of the Cluck N' Chatter line of Naked Necks! 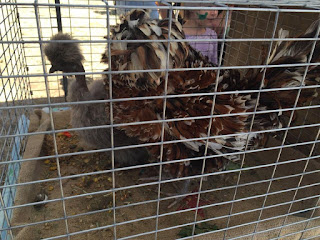 a better picture of snazzy will come, i promise! 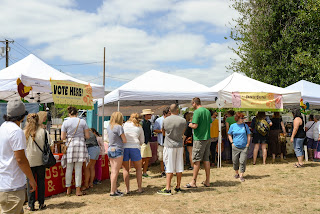 The fair, as you can see, its hard to see the chickens with all these people around! 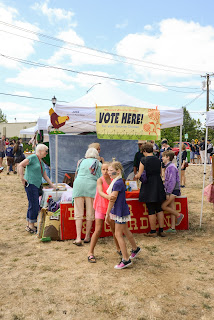 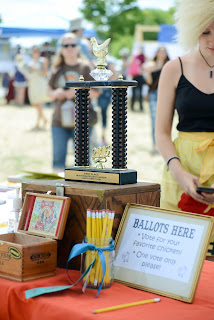 The all important "most beautifulest chicken" trophy!

First Place trophy went to Snazzy!  Her crazy, stick-out-in-all-directions feathers carried the day.  We will post pictures! I'm embarrassed to say that as of this moment I do not have a good photo of her, but more pictures are coming in.

Second place went to Grace-Mary!  The Easter Egger with the beautiful rust and silver feathers was a big hit.

Thanks again everyone who came out!  Keep an eye out for us, we are coming back next year for sure! 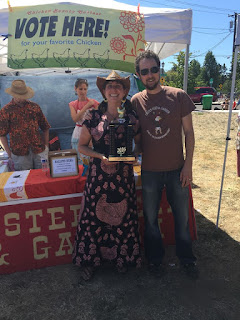 Foster Feed & Garden
10307 SE Foster Road
Portland, Or 97266
503.777.2967
For all your urban farm needs!
Including:
Scratch and Peck
Organic Chicken Feed and Treats!
These will be in our goodie bags
this year!
scratchandpeck.com

lentschickencontest@gmail.com
email us with questions or comments!